Bridge spikes a van into the pavement.

This is off of WFAA.com: 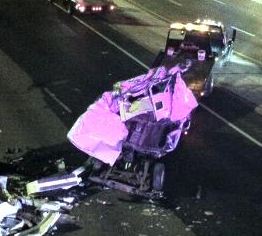 A car hauler was passing under the bridge, but couldn’t clear it, hitting the nose of a van on top of the hauler. The van tumbled from the hauler, causing a mess for cleanup crews.

Part of the interstate around the bridge was closed for about an hour as TxDOT crews inspected the bridge and clean-up was under way.

No one was hurt and the bridge is intact.