The closing of PTS is now official

We called it on the 11th but now ,Jeff Cornish, the CEO of Performance transportation Services has made it official on the company website. I think the teamsters are fortunate that Jeff threw in the towel and folded when he did. If he would have let the strike extend several weeks then the shippers would have been forced to find non-union carriers to move the cars. Here is a copy of the letter: 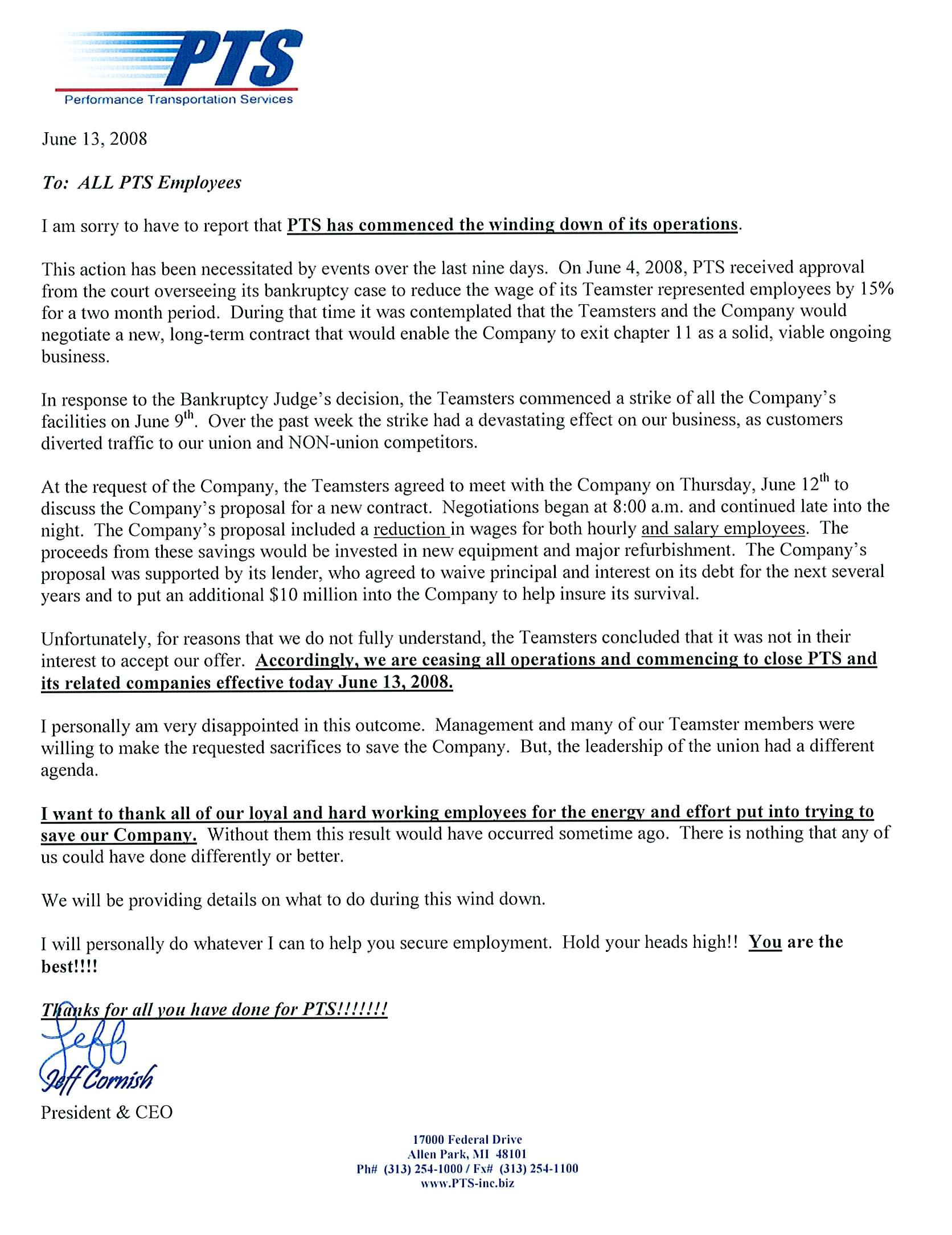 Here is the Teamsters rebuttal

PTS announced today that it was shutting down, effective today, and Teamster carhaul negotiators are setting the record straight about the company’s demise.

“In its announcement, PTS suggested that our failure to accept its most recent proposal led to the closure, but nothing could be further from the truth,” said Fred Zuckerman, Teamsters Carhaul Director. “We learned this afternoon that PTS permanently closed its doors after its primary lenders, Black Diamond Capital Management, cut off access to its credit facility earlier this week. The union has been on strike against PTS since Monday, June 9, 2008, in support of our bargaining demands and in protest of the company’s unfair labor practices. PTS’s top officials met with us all day yesterday to try to end the strike and to convince us to accept drastic wage concessions for our members. The company did not provide us with information that was anywhere near adequate to support its demands. The company did not present us with a viable plan to get out from underneath its debt. Instead, the company wanted to force our members to bear the lion’s share of the cuts and to shoulder a grossly disproportionate share of the ongoing risks relating to the company’s problems with its lendors. We countered with a detailed proposal to the company, which included significant operating improvements for PTS and which in our opinion would have enabled to company to survive. The company rejected our proposal and insisted only on cutting our members’ wages. At the same time, though, the company’s top management would not take the same cuts for themselves. Their last-second gesture to take just a modest cut in relation to the cuts they wanted our members to take was an empty one at best. Based on the company’s actions today and reports of lock downs at the facilities, it appears the company has chosen to shut its doors rather than continue talks with the union.”

There is two sides to every disagreement. I think this one is no exception and both sides have valid points. I think Zuckerman loses some credibility when he says “it appears the company has chosen to shut its doors rather than continue talks with the union.” I don’t believe that PTS has any choice. They have run out of time. Creditors are pushing for chapter 7 so they can begin recovering assets.

This entry was posted in Auto Transport and tagged bankrupt, pts, teamsters, union. Bookmark the permalink.

One Response to The closing of PTS is now official