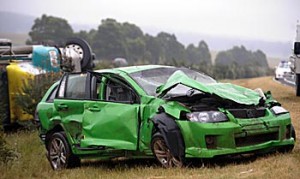 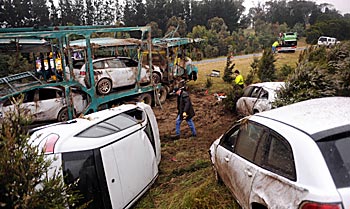 This article is off of the Hearld Sun:

Eight new cars were crashed before logging a single km on the clock this morning, when the truck carrying them overturned.

The semi-trailer car carrier carrying eight cars overturned on the Western highway between Gordon and Ballan.

The accident happened at about 2.30am, and caused some disruption to morning traffic because heavy haulage could not start until first light.

Drivers were forced to take alternative routes because the Melbourne-bound highway was blocked for most of the morning.

The driver of the trailer was taken to Ballarat base hospital with minor injuries.

Notice down there they refer to the “driver of the trailer” Up here we drive trucks and tractors that pull trailers.

This entry was posted in Auto Transport and tagged accident, oops. Bookmark the permalink.