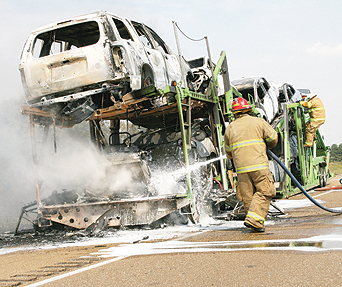 This information is off of the Times-Herald of Forrest City, Arkansas article by Alan Smith:

The driver, George Burns of Sandy, Tenn., was not reported injured. Burns works for Allied Systems in Memphis and had eight vehicles on the hauler’s trailer at the time of the blaze.

Shane Dallas, SFC Emergency Management Coordinator, was at the scene and spoke to Burns about what happened.

“The driver stated that he had a blow out and pulled over to get out of traffic,” said Dallas. “He got out of the cab and saw that the rubber on the tire was on fire. He tried to put it out himself with a fire extinguisher. After he figured out that he couldn’t put it out by himself, he tried to remove the trailer so the vehicles he was hauling would not get caught in the fire.”

Dallas stated that Burns told him that he heard a loud pop caused by the fire, so he got away from the hauler. “Seven out of eight of the vehicles he was hauling were heavily damaged in the fire,” Dallas said.

UPDATE from a co-worker of the driver that posted on carhauler.com

I’ll try to get this straight, the driver was given the truck as a spare, the truck had been written up before for brake problems in the recent past, I think just the day before. Anyway, the driver had to make a split pickup at our Ford yard in Memphis, then go across the Ms. river to our GM yard in Ar. About a distance of 25 miles. When he pulled into the GM yard the RR brake on the tractor was smoking so bad drivers said you couldn’t see the tractor. He called back to the shop and they sent an outside jobber to the yard to disable the brake and they claim they told him to bring the truck back to the terminal, 25 miles back to Memphis. The jobber is giving the company a written statement that he told the driver to take the truck back to the termimal. While the jobber worked on the brake , the driver finished loading the truck. The driver claims the jobber told him it was ok to run the load before he took it to the terminal, this was not a city load, it was a road load to Pine Bluff, Ar. The driver did not what to go back to Memphis and switch the load over to another truck. So he took off westbound instead of eastbound towards Memphis. He got about 25 miles and said he saw the tire coming apart, he stopped and it was on fire , he tried the fire extingusher but it just flamed back up. He didn’t know exactly how to release the 5th wheel , but finally got the pin released and got back in the cab just in time for the rear window to blow out. Then a passerby told him he needed to get out of there, he grabbed is clothes bag and got out. Looking back he should not have driven the truck at all after the brake was disabled. It should have been put out of service right then and there. The company or it’s agent (the jobber) should not have told him it was ok to drive either to the terminal or to finish the load, what ever the truth is he would probably not have made it back to the terminal and would have burned up in downtown Memphis. The company used Art. 40 section 6b, because it calls for subject to discharge on the first offense. Flagrant disobeying of orders only calls for a reprimand on the first offense. At this point the driver is out of work , not able to get unemployment because he was fired, and is applying for welfare. wdnj