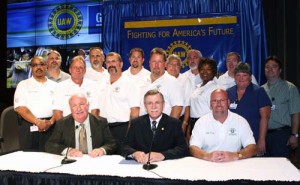 According to Yahoo News : Congress killed a $14 billion package to aid struggling U.S. automakers Thursday night after a partisan dispute over union wage cuts derailed a last-ditch effort to revive the emergency aid before year’s end.

Republicans refused to back federal aid for Detroit’s beleaguered Big Three without a guarantee that the United Auto Workers would agree by the end of next year to wage cuts to bring their pay into line with U.S. plants of Japanese carmakers. The UAW refused to do so before its current contract with the automakers expires in 2011.

Update: Dec. 13 2008 The uaw is blaming some southern senators for the failure of the bailout package. According to another Yahoo aritcle:

“Autoworkers remain angry with the senators who tried to negotiate wage and benefit concessions from the union, then scuttled the House-passed bill that would have granted the loans and set up a “car czar” to oversee the nearly insolvent companies and get concessions from the union and creditors. Their top targets were Senate Minority Leader Mitch McConnell, R-Ky.; Sen. Bob Corker, R-Tenn., who led negotiations on a compromise; and Sen. Richard Shelby, R-Ala., who has been a vocal critic of the loans.

Kentucky, Tennessee and Alabama all house auto assembly plants from foreign automakers, and union officials contend the senators want to drive UAW wages down so there would be no reason for workers at the foreign plants to join the union.”

My take is that the union plants are in danger of closing and the foreign ones are not. How many workers are going to vote to unionize when management is simply going to stand up and say that the UAW will cause their plants to fail too? The union needs to work at getting the big three out of trouble and back in the black before they worry about the foreign assembly plants.