This is off of post-tribune: 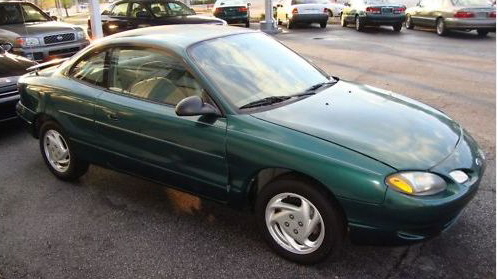 According to the police report, a Florida man who works for S&B Auto Transport arrived in Center Township in Porter County on Monday and parked the car carrier along the side of the road at Churchill Court and County Road 100W. After calling the Porter County resident who ordered the vehicle, the carrier driver started the Escort to warm it up, which he said he usually does for customers, then began setting up the trailer’s ramps. As he did so, he noticed the car’s rear lights were not working. Once the customer arrived, the car starting making a clunking noise and they saw flames come out from under its hood. The customer told police she ordered the green car from Guaranteed Auto in Sandy Springs, Ga., and she was not aware of any problems with the vehicle.

Update1: Dennis from S&B auto Transport says the car was still on the carrier when it caught fire. He feels that they are not liable because their driver did not do anything wrong. They did not get paid their transport fee and he feels that is unfair. He says the car was towed off of the carrier and taken away to an unknown destination. He feels Guaranteed Auto should stand behind the car by taking care of the repairs. Since this move was brokered by Total Car Shipping he thinks they have some liability for shipping a faulty car. He points out that this could have resulted in a loss of the whole load, the carrier and possibly personal injury as well.

Update2: Sherri from Total Car Shipping points out that S&B signed an agreement that indemnifies Total Car Shipping from any claims. She also explained that the reason that the driver did not pick up the delivery payment was because the customer needed to use the cash to pay the tow truck and so she has paid the balance with her credit card to Total Car Shipping and they will have S&B paid within 15 days.

RECAP: This is definitely a sad chain of events. The positive side is that there are no injuries and this is a relatively in-expensive economy car that sold for just $1,575.00 on ebay, so the liability is not huge. I think there is one humorous aspect to this. The car was described on ebay as having “BURNING HOT HEAT!!!!“:)