Why is there no WARNING? 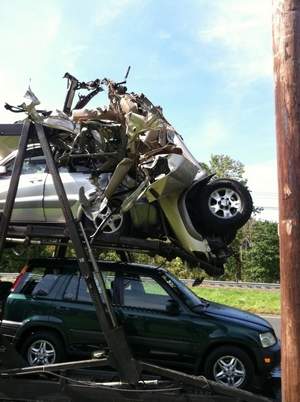 warn the driver if he released the brakes before he lowered all of the decks onto the stops. I’ve wondered this before. A distraction that takes a driver out of his/her routine is all it takes to cause a mess like this one reported by Daily Record:

FAIRFIELD— A car carrier traveling east on Route 46 struck the Gately Overpass forcing the closure of Route 46 East on Monday for about four hours while engineers examined the bridge to make sure it was safe.

The carrier, registered to Mega Carrier of Parsippany, had just left the Skyline Auto Auction on Route 46 East after picking up vehicles , police said.

The driver of the carrier, identified as Jhofre Penafiel, 35, of Corona, N.Y., did not lower the vehicles on the top of the carrier before leaving the auction, police said.