The advertiser is reporting an AutoLogic fire: 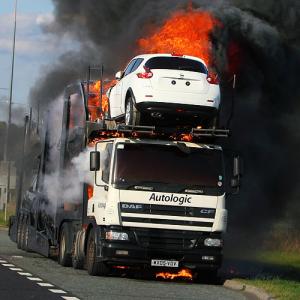 FIREFIGHTERS fought to control a blaze at the side of the road yesterday afternoon after a car transporter went up in flames on the A19. The driver steered the vehicle to the side of the southbound carriageway, near the slip road for Easington, east Durham, shortly after 4pm, before escaping unhurt. The road was reopened within 30 minutes after firefighters extinguished the blaze. Keith Taylor, who captured the dramatic image, said: “We arrived just after the vehicle had burst into flames. The driver got out safely, but he looked visibly shocked. “I was really concerned it was going to blow up.”

This entry was posted in Auto Transport and tagged fire, oops. Bookmark the permalink.