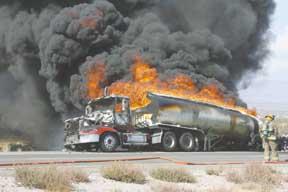 well this is one comment i never wanted to post, david allen adams lost his battle with his 3rd degree burns. dave was pronounce dead around 2:30 on sunday afternoon, 7-13-08. i lost my best freind in the whole world. this man was more than freind he was my brother,and this so far is the hardest thing i ever had to go thru. i cant say enough about dave, he was carring, giving, and he loved every body. dave leaves behind, mother & father and 3 brothers, who loved him very much and will trully miss him, also he leaves a wife norma & 3 children who will sadly miss there provider there hero. DAVE WE LOVE YOU MAN FOR ALWAYS. R.B.W

I read on Mohave Daily News that a car carrier collided with a fuel tanker at milepost 14 on Hwy. 68 and that one of the drivers was flown out on a helicopter.

Here is an update from the Kingman Daily Miner:

Around 2:30 p.m., two trucks collided on the route, closing both lanes for more than six hours.

According to the Arizona Department of Highway Safety, a tanker truck carrying 9,000 gallons of gasoline in the westbound lanes drove into the back of a car hauler headed in the same direction. Both trucks caught fire.

Both the east and west bound lanes were closed until 9:20 p.m.

David Alan Adams, 41, the driver of the car hauler, was flown to University Hospital in Las Vegas for third degree burns.

Salvador Miguel Pizano, 43, the driver of the tanker truck, was treated for neck pain and released.

DPS is investigating the crash. It is unknown at this time if driver error or something else caused the crash.

dave adams is one of few well experiance car hauler’s he has driven auto hauler’s for about 10 years +. and as of today he remains in critical condition, this is extreamly difficult to deal with as his best freind of 17 years.just imagine his kids 3 and wife norma adams. this kinda stuff happens all the time, and usally the driver is blamed. there was a car involved with this wreck, my information is that there was a ford mustang that cut off the tanker driver which created this whole mess. mr dave adams has only a 60%chance of survival. as daves best freind i can only encourage anyone who has a better description of this mustang or have any other information please contact your local police dept. think of mr adams very young family, and remember just a professional car hauler hard at work supporting his family, now on his back helpless as a newborn baby. please help in the way you can.

Around 2:26 p.m., a car carrier westbound near Milepost 14 reportedly drove into the back of a fuel tanker carrying about 9,000 gallons of fuel.

The impact ruptured the tanker, igniting both trucks, officials said.

This entry was posted in Auto Transport and tagged accident, fire, Gone but not forgotten, tragedy, wrecks. Bookmark the permalink.