Car Haulers in the News

I missed this on feb 1st

SCOTTSDALE, Ariz. — An elderly couple was seriously injured Friday when their car slammed into the back of a big rig unloading new cars at a Scottsdale Lexus dealership.

Police said the woman was driving when the couple’s sedan, heading east on McDowell Road at about 40 mph, collided with an 18-wheel car hauler that had stopped in the roadway to unload cars.The new vehicles had all been unloaded from the truck, allowing the couple’s sedan to go up the car hauler’s ramp and slam into the back of the cab before coming to rest hanging halfway off the ramp.Police said the couple was taken to a Scottsdale hospital, the man with life-threatening injuries. 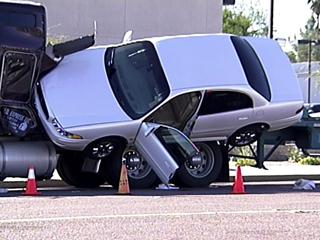 This entry was posted in Auto Transport and tagged accident, news. Bookmark the permalink.

4 Responses to Car Haulers in the News