Carhauler crashes into the Colorado river

LAUGHLIN, Nev. — An out-of-control semi-truck loaded with cars careened off a bridge and crashed into the Colorado River near Laughlin, said the Nevada Highway Patrol.The truck was eastbound on state Route 163, a main roadway through the town on the Nevada-Arizona state line, said Nevada Highway Patrol Trooper Kevin Honea. 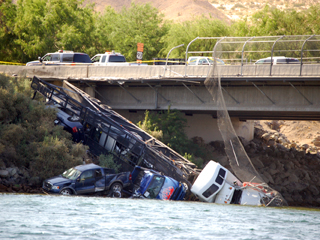 I wonder how heavy this truck was. I think he just had on 5 vehicles. That is a quite a grade to come down but with five axles of brakes and just 60 or 70 thousand lbs gross you would not expect him to overheat the brakes, especially if he has an engine brake. Fortunately we just have some busted up vehicles and minor injuries to the people involve. I’m sure it was quite scary for the occupants of the cars that were hit but can you imagine the ride that driver had!

6-02-08 ronjon619 posted a comment that he thought there was six vehicles so I posted this second picture that proves he was right and I was wrong. I had missed the little black car in the belly. Apparently he has a sharp eye!

You can view a bunch of great recovery pictures of this accident on TOW411. Here is another one from there 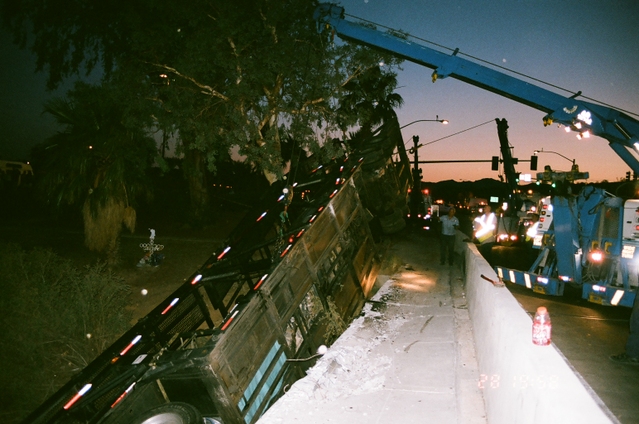 2 Responses to Carhauler crashes into the Colorado river