This is off of CPcomunity.com: 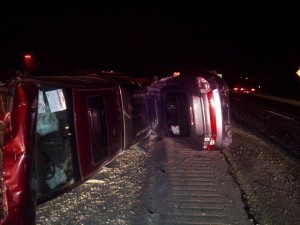 A separate morning crash blocked traffic on the Borman Expressway.

A car hauler carrying luxury vehicles rolled over about 4 a.m. in the median on northbound I-65 near U.S. 231. The left lane remained blocked for nearly four hours as crews worked to clear the area, jamming traffic for miles. No injuries were reported.

An investigation by Trooper Lawrence McFarrin found that Ibrahima Tounkara, 51, of Indianapolis, was driving a 2007 GMC pickup truck and pulling a flatbed trailer with luxury vehicles. The GMC was passing a semi when the semi allegedly pulled into the passing lane and hit the flatbed.

The impact caused the GMC and the trailer to swerve out of control and slide in front of the semi, which struck the truck, police said. The GMC came to rest after hitting a barrier cable in the median. The hauler dumped vehicles into the median, including a Porsche and a Hummer.

The driver of the semi failed to stop and continued northbound. The semi was described as having a white cab and a white box trailer. It possibly sustained crash damage, and there might be red paint on the front of the cab on the left side.