Is our current Broker/Carrier system broken? 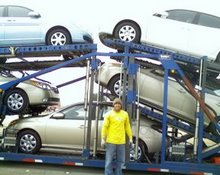 First read this excerpt from a blog post titled tales of a car-hauler:

“Well, my contract says we have door-to-door service, so I expect it to be delivered to my door- I’m doing you a favor by meeting you in the street.” I seriously wanted to hit the guy, but whatever, he just paid a butt-load of money to have his precious Volvo hauled from Massachussets to WA, he was beyond snotty, and wasn’t going to understand. Just b/c the people he signed the contract with (who then find car carriers, us, to haul for them) of course don’t have the same contract with us. So it’s not totally his fault- those original people that he found will promise people anything just to get them to sign a contract, knowing full well that we, the deliverers, get screwed in the process.

Then let me tell you that I hear this all the time. The broker/sales agent isn’t there in the middle of the street at midnight so the drivers gets yelled at instead. In this case Mcwife yells back (read her blog).

One Response to Is our current Broker/Carrier system broken?