It is a dangerous job!

This is off of Republican American 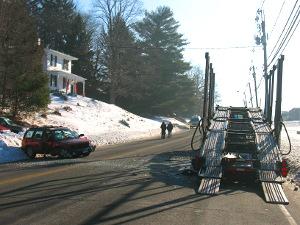 NAUGATUCK — A female truck driver was seriously injured when a teenage driver slammed into her and the car carrier she was operating on Route 63 in Naugatuck Thursday morning.

The truck driver, who had just unloaded a shipment of cars to J&M Automotive on New Haven Road, was standing outside the truck, attending to the carrier portion of the vehicle, when a driver traveling southbound on the roadway hit both her and the truck, according to Naugatuck Police Lt. Robert Harrison.

Harrison said the truck driver, 40-year-old Sarifa Sara-Sanchez of Bloomfield, N.J.,, was transported to St. Mary’s Hospital in Waterbury, where she was listed in critical condition.

He said the 16-year-old driver of the car, Ronald Jennings of Prospect, was uninjured, even though the force of the crash was enough to cause the airbag to deploy. He said no drugs or alcohol were involved, but that sun glare may be a factor in the accident.

2 Responses to It is a dangerous job!