In this day and age of cell phones It seems like a simple sign at the crossings with a number to warn the train would be a pretty easy fix to me.

This is off of SCVNews.com:

A Metrolink train collided with a car carrier Saturday night, sending three people to the hospital with minor injuries.

The crash occurred at about 9:40 p.m. The Los Angeles County Sheriff’s Department 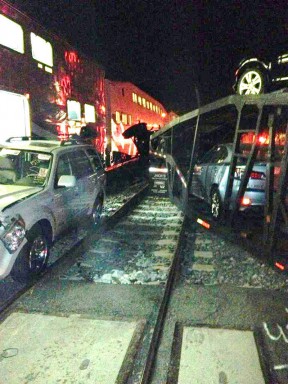 identified the location as 23651 Pine Street, just south of the intersection of Pine and Newhall Avenue.

According to witnesses at the scene, the train hit the car carrier after it got stuck on the tracks.

A woman who was with the car carrier said she and her male driver were from out of town and got lost on Pine Street. The woman, Demeta Freed (phonetic spelling), said they met up with another, larger 10-car carrier, whose occupants told them to turn around.

Evidently they were in the process of doing so when the pair’s trailer got stuck on the train tracks.

They exited the vehicle. Freed said her driver wanted to call 9-1-1 but the people in the other car carrier told them not to worry about it because no trains come through the area at that time of night. 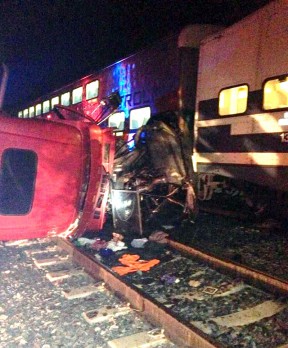 In fact, Metrolink Train No. 271 was outbound from Union Station and due to arrive in Newhall at 9:40 p.m. and would have reached Santa Clarita station at 9:48 p.m.

The train crunched the cab of the semi-truck and damaged at least two of the new Lexus vehicles it was carrying.

Freed said she asked the occupants of the other car carrier to stick around after the crash but they disappeared.

One of the 220 Metrolink passengers, who identified himself as Vietzke, said he wasn’t able to see what happened from inside the train.

“It was just kind of a hard stop,” Vietzke said. “We didn’t see a thing. All we did was feel this thing like he jammed the brakes on, all at once.”

There were no injuries to the parties in the car carrier because they were standing outside of their vehicle when the train hit it.